I was never really into Cosplay, but in 2012 an event came along that changed all that.

Destination Star Trek London was to take place in October of that year, and some friends convinced me to buy some costumes. I did alot of research on various companies. There were some very cheap (and very bad looking) costumes, some VERY expensive (but amazing) costumes. In the end I settled for a company called CosplaySky.

As price goes they were mid-range. Not cheap and horrible nor very expensive. They also had a great range of Star Trek costumes. I had a few questions and emailed them. A nice lady called Sophie answered very quickly and cleared up any concerns. With the convention approaching, I had to get ordering.

In the end I settled on three costumes. I purchased an Original Series Red Shirt, an operations top from Star Trek: First Contact and an Landing Party Jacket from Star Trek: Enterprise (pics below). I sent off my measurements and waited. Very quickly I received a confirmation email which told me I could keep track of the order online. It was very quick. Within 8 days the order was complete and shipped! They arrived within 5 days, very prompt when you consider they had to travel from China to London.

First, let me say that most of their costumes are designed using images taken from the show/films so they are never going to be 100% screen accurate. If that is what you want, go and spend £1000s elsewhere and good luck. One of the things that attracted me to this company was that they made costumes for you no matter how big or small you are.

Star Trek: Enterprise Landing Party Jacket
Overall, a very good outfit. My two minor issues are these: the sleeves near the cuff are just slightly too baggy/big and the yellow colour for the stripe was a bit too bright. Needs to be paler. On the whole a great costume and a perfect fit!

Star Trek: First Contact Operations Top
This was the one I was apprehensive about, but when it arrived it was near perfect. So comfortable to wear too! Again, only two minor issues: the turn up on the cuffs was too big and the yellow colouring for the undershirt and striping was again a bit too bright, but still looked great!

Star Trek Red Shirt
I had an issue with this top, but it was all my fault! When it arrived and I put it on, it was way too long. The bottom came down near my knees and I had about 8-10 inches extra on each sleeve. I checked the order and I noticed I had made errors with the measurements on this one. I washed it a couple of times on hot and tumble dried it and now it fits! Very authentic looking with my only gripe being the collar was slightly too large. Nothing else!

Would I buy from them again?
Now, I know some friends had issues, but some of them ordered very near to the con and it was rushed. My advice- give yourself plenty of time!

Yes, I would wholeheartedly order from them again! In fact, there is another Star Trek con in London this year and I am planning on buying at least two more and so are some friends as we are planning to go as a group!

Wearing my First Contact Operations costume, I, along with some friends, took part in the attempt to break the record for “Most people dressed as a Star Trek character in one place”. I am pleased to say we broke the record!

I can highly recommend Cosplaysky to you and suggest you visit the site at www.cosplaysky.com! 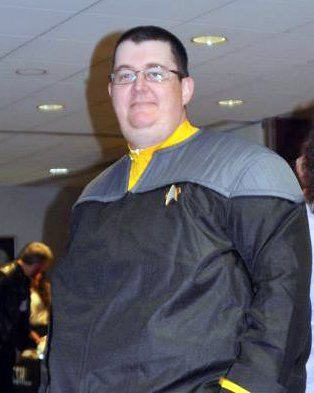