If you have never been to The Prince Charles Cinema before I highly recommend it. Situated just off of Leicester Square, the cinema itself is happily stuck in time. When you visit you will be reminded of how cinemas used to be back in the 70s (if you can remember that far back, or further!). The PCC shows a variety of cult films and the tickets are quite reasonable. £10 annual membership (or £50 lifetime) gets you discounts on all films plus discounts at the kiosks and bar.

Last night I had the pleasure of seeing one of my favourite films on the big screen and in 70mm. It was a first for me with this movie as it came out 4 years before I was born. I’ve only ever seen it on Betamax and then VHS and DVD.

The film is Stanley Kubrick’s space masterpiece, 2001: A Space Odyssey. I’m a huge fan, I’ve read all four books in the series and seen both 2001 and 2010:The Year We Make Contact numerous times. I was so glad to see the cinema offering a showing starting each night at 20:01. 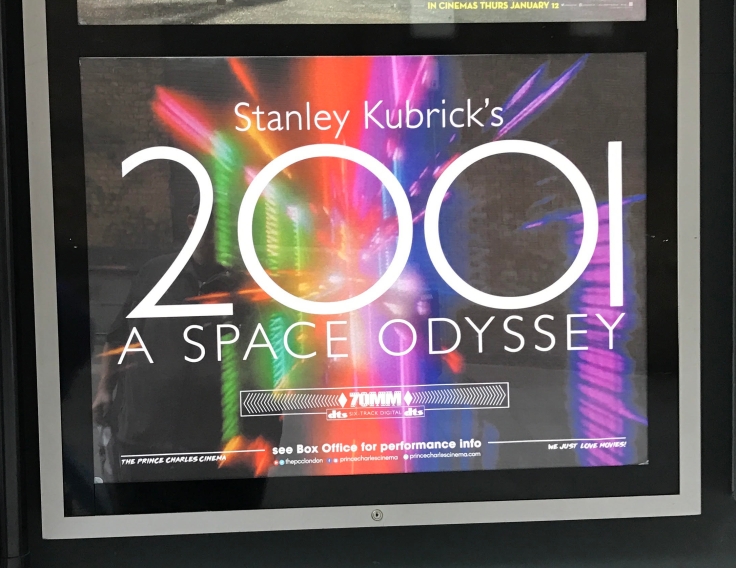 The film was amazing. The special effects had stood the test of time and the physical models looked amazing on screen. The soundtrack was as awesome as ever. The quality of the 70mm print was much better than I expected. Having seen some other 70mm films at the PCC I expected the print to be a bit grainy and possibly discoloured in places with obvious splice-lines etc, but nothing. If it had been restored then the restorer has done a fine job, otherwise it’s been very well looked after.

It was also quite amusing to have an intermission during the movie. Something I’ve not experienced for a very long time.

So as I said, if you like cult films (or even Disney’s Frozen sing-a-long version) then The Prince Charles Cinema is a must!

Follow this link to see what they are showing: The Prince Charles Cinema