SPOILERS BELOW- DO NOT CONTINUE UNLESS YOU WANT TO BE SPOILED!

Secret Cinema are back and this time they are celebrating their 10th anniversary by going back to their first event with Blade Runner, only this time it was to be bigger and better.

The whole premise of the event this time was around humans moving off-world to live on colonies in outer space (as in the film) because the Earth was polluted. Replicants and companions are quite common (again, as in the film) but the Nexus 6 model was banned due to it being a danger- just like the film.

Three of us were planning on going so bought tickets (unfortunately, our friend Fudge had to pull out at the last minute).  Within a few days we were sent an email inviting us to sign up for our identities for the evening. A quick questionnaire determined your job of which there were many. I was assigned to be Dennis Lockwood, an ambassador for The Utopia Corporation who run all the off-world colonies. My friend David was to be a Private Detective whilst Fudge would be a ‘Professional Friend’. We were given a list of things to bring (including goggles or glasses, a transparent umbrella or jacket, a notepad and more) and told how we should dress. Regular updates gave us more information leading up to the event. We also had to print off our ID card and bring it with us.

The day of the event arrived and we had to be at Canning Town Station by 6pm. A couple of LAPD Police Officers directed us to the World Terminus, just across the road. Upon arrival we had our tickets scanned and was given a seal-able bag for our mobile phones.

We then entered Downtown LA 2019- the people at Secret Cinema had painstakingly created the stalls, the people, the whole environment, right down to the acid rain! Many key characters from the film could be seen wandering around including Rick Deckard, Rachael, Detective Harry Bryant, Taffey Lewis, JF Sebastian, Gaff and more. There were also plenty of replicants of various models (including Leon, Pris, Zhora and Roy Batty) wandering around. You could eat at any one of the Chinese food stalls, get drinks at nearby bars, visit The Snake Pit, LAPD HQ and Tyrell Corp. Every area had actors in who never break character.

David went off to LAPD to get his assignment and was pretty quickly chasing around The Snake Pit with other detectives. My assignment was to report to Utopia Corp to be inducted. The induction took the form of listening to and taking part in a sales pitch for those wanting to move off-world. At the end, Eve, the Utopia liaison, told me to report to Tyrell to undergo testing. 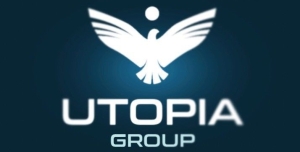 On arrival at Tyrell, we were separated by wrist band colour. Mine was red and there were only a few of us- there were not many reds in the box when we were given them at the entrance (something on our ID cards told the staff what colour to give us).

I was taken, with 4 others, to a back room and shown a rather disturbing ‘mental conditioning’ video. At the end of the video we were told that we were all Nexus 6 replicants and had to do our best to avoid the Blade Runners and stay alive. We had two choices- 1) Go back to Utopia Corp and persuade Eve to get us off-world quickly or 2)Try our best to blend in and stay undetected. 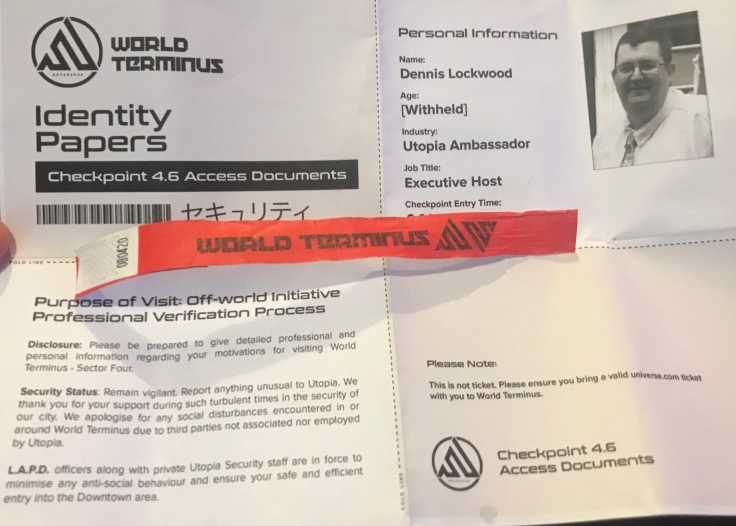 We left Tyrell. I chose to go with option one, however, someone had beaten me to it. When this other Nexus-6 approached Eve, she worked out he was a dangerous replicant and called the police. He was very quickly chased down. I then decided to blend in and hit the various bars and different districts whilst David ran around being a detective. I had to avoid the scavengers area as they were all diseased. I had a close encounter with someone trying to sell me illegal off-world tickets.

Then, I decided to fall down the stairs and twist my knee. An LAPD cop and the First Aid guys were awesome and after applying a freeze bandage I headed back out into Chinatown. I met up with David shortly before the film began and the same LAPD cop helped get us to the front to get a decent seat. There were 3 massive screens that all became part of the set and key scenes were, as normal, acted out along with the film. 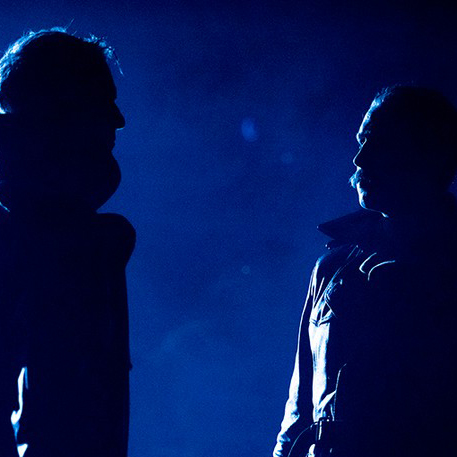 Both I and David had an absolute blast and were both upset that Fudge could not join us as she would have loved it! My only complaint (and David’s) was that the cinema seating was too small and too cramped. Luckliy, Detective Krause (they are ALWAYS in character) moved me to a VIP seat due to my dodgy knee. It was better but not by much.

If you are a big fan of Blade Runner then you must do this. It’s awesome!

A HUGE thanks to David for coming out of his way to pick me up and drive me home again!