Tom Clancy’s Jack Ryan is a new 8-part show which premiered on Amazon Prime in August 2018. It acts as a prequel to the books and films already set in what is known in ‘The Ryanverse’ and ignores the events of the last two Jack Ryan movies- The Sum of All Fears with Ben Affleck & Jack Ryan: Shadow Recruit with Chris Pine.

Jack Ryan has now been played by a total of five different actors. Alec Baldwin played him in ‘The Hunt for Red October’ whilst Harrison Ford played Jack in ‘Patriot Games’ and ‘Clear and Present Danger plus the aformentioned Ben Affleck and Chris Pine.

In the new Amazon show, John Krasinski (Of The Office US fame) plays Dr. John Patrick “Jack” Ryan. Jack is a CIA Analyst whose job is to track terrorist organisations via their financial transactions. As in the books, Jack has experience as an accountant/broker which makes him ideal for the job. He works in Terror, Finance, and Arms Division (T-FAD). At the start of the show Jack clashes with his new boss, Jim Greer. This is a big change from the books which I will touch on later. Jack comes across some dubious transactions that lead him to uncover a terrorist plot with worldwide ramifications. 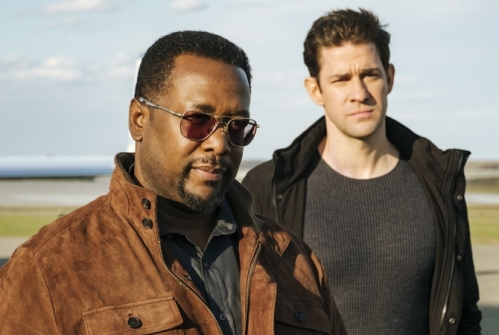 Whilst all this is taking place, Jack briefly meets with an old boss from his Wall Street days, Joe Mueller. At Joe’s birthday party, Jack meets Dr Catherine Mueller, Joe’s daughter. Anyone who has read the books will know that at some point in the future, Catherine (Cathy) Mueller will become Mrs Cathy Ryan. There isn’t a great deal of change from the books and films. In ‘The Hunt for Red October’ her name was Caroline “Cathy” Ryan and was played by Gates McFadden from Star Trek: TNG. Anne Archer played Dr Caroline Catherine “Cathy” Ryan in the two Harrison Ford films. In all versions she is a medical doctor although her speciality has differed. In the new show Dr Catherine Mueller is an expert on infectious diseases and is played by Australian actress Abbie Cornish (the best looking Cathy Mueller so far!).

What follows is a neatly woven tale of action and intrigue set against the backdrop of the war on terror. One new aspect to Jack’s character is that he suffers from PTSD- he has recurring nightmares and bouts of insomnia due to a helicopter crash during his time in Afghanistan. Again, this is a another change from the books as in the books the helicopter crash took place whilst Jack’s marine unit was taking part in a NATO exercise over the North Sea. The scars, wounds and back problems still remain the same.

I don’t want to give too much away as it’s an excellent series and deserves to be watched. I’m a big Jack Ryan fan and was worried when I heard about this series being developed especially after ‘The Sum of All Fears’ and ‘Jack Ryan: Shadow Recruit’. They were ok action films, but not Jack Ryan.

John Krasinski does a great job as Jack Ryan. He got the slightly-nerdy, honest, honourable, overgrown-boyscout bit right and didn’t play him like a Jason Bourne character. Yes, he held his own in a fight, but then he is an ex-marine and should be able to. It was good to see his relationship with Cathy really develop.

It’s already been renewed for season two. I’m really hoping that as time goes on it does start to link in more with the books. At some point Jack has to leave the CIA, get his history degrees and end up again as an analyst (focussing on naval warfare) at the CIA and then teaching history at the Naval Academy!

At the end there are a few nods to the books/films. For example, Greer jokes that maybe one day he will be Deputy Director CIA (see below) and when Jack is handed a book from Greer at the end there are nods to Moscow and Russia possibly setting up the lead in to either Red Rabbit or The Hunt for Red October.

Read on for my thoughts on the changes to the Jim Greer character.

I must admit that it took me a couple of episodes to warm to the new Jim Greer.

In the new show Greer is played by Wendell Pierce (of ‘The Wire’ fame) and isn’t a great deal older than Jack. Jim Greer has just been appointed as head of T-FAD and that makes him Ryan’s boss. The appointment was seen as a demotion for Greer due to an incident in Karachi. He is also Muslim. There doesn’t seem to be any naval connection or family to speak of.

The Jim Greer from the novels and films is quite different. For one thing he is Vice-Admiral James Greer USN and was brilliantly played by James Earl Jones in the first three movies. To attain the rank of Admiral would mean long, distinguished service in the Navy. His role within the CIA is vastly different as he is the Deputy Director (Intelligence) of the agency. Greer also has a wife and family.  I would need to re-read the books again to check as I think he was Catholic. These are fairly substantial changes. Hopefully they will be addressed. To be honest though it won’t spoil the story and it’s not the first time someone has retconned a backstory. 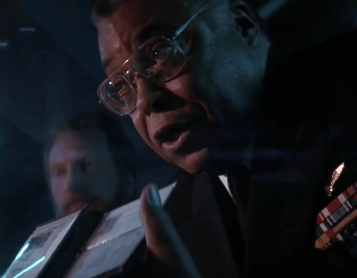