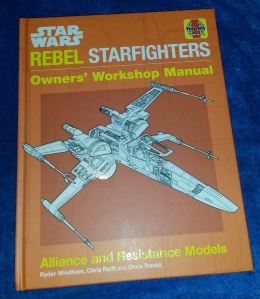 Detailing the technical information of all known starfighters, this book covers the evolution of the ships used by the Rebel Alliance all the way through to the Resistance.

Starfighters featured in this manual are the Y-Wing, A-Wing, B-Wing, X-Wing and the U-Wing as seen in ‘Rogue One’ and soon to appear in ‘The Rise of Skywalker’.

Ship schematics and specifications are included for each vehicle. The origins of the various ships is also covered, with some beginnings going all the way back to the Clone Wars.

There is also an excellent size comparison chart which finally answered a few questions I have been pondering for a while now. 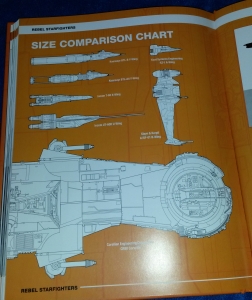 An added bonus is the section on hangers and bases and a close-up look at the pilot’s kit and flight suit with both the Rebel Alliance (modelled by Luke Skywalker) and Resistance (modelled by Poe Dameron) versions shown.

This book, written by Ryder Windham and fully illustrated by Chris Reiff and Chris Tremas is an absolute must for any Star Wars fan, especially if you have an interest in vehicles. In addition to the illustrations and graphics by the two Chris’, there are some beautiful images provided by Lucasfilm.

I have always been a huge fan of the Y-Wing fighter from the moment I saw it on the big screen back in 1977. Other ‘encyclopedias’ based on Star Wars have always focussed on the X-Wing with hardly anything about the Y. This book is very different! There are so many facts that I, to my shame, didn’t even know.

If you have dreamt about leaping into the cockpit of one of the fighters that took part in famous battles such as ‘The Battle of Scarif’, ‘The Battle of Yavin IV’ or the attack on Starkiller Base then this really is the book for you!

Also available are similar Owners Workshop Manuals for the Imperial and First Order Tie Fighters, The YT-1300 Millennium Falcon and as mentioned the USS Enterprise from Star Trek beginning with the NX-01 all the way through to the NCC-1701-E. 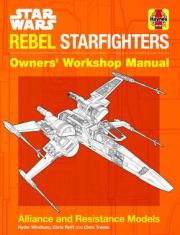 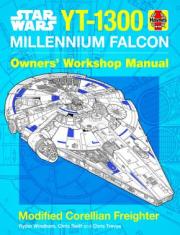 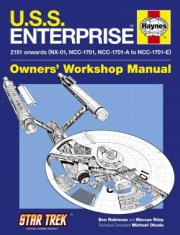 Thanks to Lianne over at Haynes for allowing me to review this awesome book!

Ryder Windham is the author and co-author of many Star Wars books. His previous collaborations with artists Chris Reiff and Chris Trevas include the Haynes TIE Fighter Owners’ Workshop Manual and YT-1300 Millennium Falcon Owners’ Workshop Manual. He is a co-founder of the World Blood Drive, an annual international event that encourages Star Wars fans to give blood. He resides in Rhode Island.

Chris Reiff is an illustrator and product designer who has been working on Star Wars for more than 20 years. Among his other recent projects are product development for Anovos and Disney as well as illustrations for Star Wars: Millennium Falcon: A 3D Owner’s Guide and Hasbro packaging. Chris lives and works in Cincinnati and spends his free time adventuring in his airplane, a 1946 Globe Swift. www.chrisreiff.com

Chris Trevas has been creating Star Wars art for over two decades illustrating books, games, toy packaging, art prints, and an array of products from t-shirts to table tops. His published works include Star Wars Propaganda and Star Wars: The Rebel Files. Chris works from his home studio in Michigan where he lives with his wife and three daughters. www.christrevas.com