A few weeks ago I wrote a piece on ‘What Star Wars means to me’ (Click here to read). Since then I’ve found myself reminiscing more and more. Some sad memories but mostly good.

In an ideal world I would add something about all of those who have been there since the beginning, but with the passing of Carrie, Peter and Kenny over the past few years and with Harrison not being on social media it will be extremely hard. Nevertheless, without them Star Wars would not be the legend that it is today. I feel very privileged to have met Carrie, Peter and Kenny. Fingers crossed that one day I can add to the list. 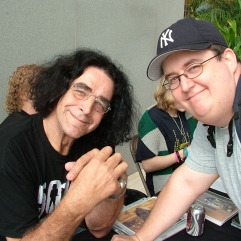 I’ve been lucky to meet many of the actors, including Anthony ‘C3PO’ Daniels, Dave ‘Darth Vader’ Prowse and Billy Dee Williams who played Lando Calrissian. Three others who were absolutely integral to the story. Threepio was the one who taught me manners- unfortunately his ability with languages never rubbed off on me. As a teen, Lando was the one I wanted to be. Suave, sophisticated and had no issues chatting to girls- something else that never rubbed off.

Earlier today Mark Hamill posted an article on Twitter about how lucky he has been to play Luke and that how the role has stuck with him. It was this article that prompted me to finish this one.

I was just a young lad when the first film came out. From the moment Luke appeared on screen I felt an affinity toward him. I couldn’t describe the feeling at the time, but since then I’ve realised I felt as naive and wide-eyed as Luke and probably a bit spoiled too. Everything was unfair at that age!

You, through Luke, became my eyes into a new world of adventure, an escape. I literally grew up with Luke and as he grew as a person, so did I. By the time of Return of the Jedi, Luke had better control of his emotions and actions- you have no idea how much this helped me get through difficult times. I learned to manage my emotions better and learned to at least try to project an aura of peace and calm.

The character of Luke appeared in many books during the 90s and whenever I read one of them, the Luke that I grew up with was there in the book. When Luke finally appeared at the end of The Force Awakens I was over-joyed. It was so good to see you and Luke back in the story

Then came The Last Jedi. I know that you had some issues with how Luke was portrayed but if I am honest I found it a beautiful conclusion to his part of the story. We are both older and, like Luke, I too have gone through some bad times over the last few years. I wanted to run away to somewhere isolated, away from any one and anything. I didn’t want to be or cause a problem. I wanted, and still do sometimes, to cut myself off. With all that Luke went through, he once again found a way to put others before himself, gave his sister and the others a chance to escape before finally becoming one with the force.

Luke probably knew what would happen to him yet he did it anyway. I can only hope for such a noble ending.

Mark, I know it probably started out as just another job for you but you and Luke are one- without you, the Luke I know would not exist.

Thank you for my childhood. Thank you for your part in making me the person that I want to be…..I will get there eventually.

I hope to meet you in person one day and shake your hand or fist-bump, whatever your preference. I want to say thank you in person- I very much hope it happens.

A week from now I will have seen the film- I think I’m ready for the emotions. Time will tell.

What I do know is that the impact that your character had on many people of my age is immeasurable.

May the Force be with you……always!