The folks over at Jedi News ran a contest to meet Anthony Daniels (C-3PO) and Joonas Suotamo (Chewbacca) at a private meet and greet at the D350 Fan Zone in the flagship Disney Store on Oxford Street. There were roughly 40 people present.

The previous day was my first proper day out in 6 months apart from seeing my therapist. Unfortunately, due to a number of triggers, I had a major anxiety attack in the store. Luckily, my friend David came with me and with his help plus assistance from the store and event staff I eventually came out of it- thanks to all who helped! 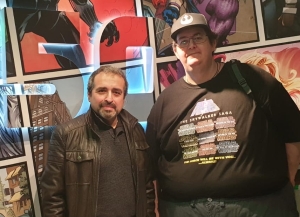 We had a quick look around the store before the meet and greet.

Apart from all the usual merchandise, one thing caught my eye. Something I don’t normally collect. At the back of the store they had a nice display of Swarovski Crystal statues from a variety of shows. They had a number of Star Wars ones and they are all beautiful. The Princess Leia one especially so.

At 3pm we were taken upstairs for the meet and greet. The line was not long as there were only about 40 people. This allowed each person to have a nice talk with Anthony and Joonas. Whilst in the queue we saw a couple of Star Wars props and statues. See below!

I spoke with Anthony about how good it was to see Threepio more involved with the story and he was telling me how he pushed for it as it was the final film.

Joonas and I discussed a particular scene in ‘The Rise Of Skywalker’. I won’t mention which as its a bit of a spoiler. It was a very emotional scene and Joonas said it was one of the hardest things he has had to film.

I had previously taken part in chatting to Joonas along with other fans on a thread on his Twitter page, discussing ‘The Mandalorian’. I gave them both a Christmas Tree topper of ‘The Child’ (AKA Baby Yoda). Anthony received a gold one whilst Joonas had a taller one. They both seemed to like them which is great!

They then signed my poster, we had a photograph and then I left. It was a great afternoon! Very chilled unlike similar events I’ve attended.

Thanks once again to Jedi News and Disney Store as well as Anthony and Joonas.