I’ve held off putting up my thoughts on Episode 9 for a while now. Partly because I didn’t want to worry about spoilers and I was also interested in how others would react to the film. Please remember that what follows are my own thoughts and opinions. You don’t have to agree with them!

Again, like The Last Jedi, this film has divided fans. I’ve followed lots of threads about it and the majority of people who liked it were of a similar age to me. Granted, a few people of my age didn’t like it but more did than didn’t. The one issue I picked upon with the younger generations seemed to be that they disliked it because they needed everything explaining to them. When parts of plot-lines or back-story are implied and subtle or subtext is used they really complain.

I must say I absolutely loved ‘The Rise of Skywalker’. I thought it was a fitting end to the whole Skywalker Saga. For me, Star Wars has always meant family and Episode 9 encapsulated that completely

I’m going to put my thoughts down by character.

The Prophecy of The Chosen One.

The prophecy of The Chosen One, the one who will bring balance to the force, has been widely discussed with lots of fans stating that the theory has now been retconned with Rey now the chosen one. I disagree. I still believe that Anakin is the Chosen One- the prophecy never stated how balance would be brought to the force just that it would. I believe that Anakin’s actions are what eventually led to the Force being balanced. His falling to the dark side which led to his Grandson trying to follow his footsteps and finish what he started. Now, from Kylo’s point of view that means to kill all the Jedi, whereas it could also mean bringing balance as started by Anakin.

I don’t think that balance can be achieved though as there are bound to be more force users out there. Unless of course it means force users being able to access both light and dark which then brings up the Gray Jedi again.

Rey started out as no one. A scavenger from nowhere important. She was desperate for family and friends and wanted an identity of her own. Her journey to find out her true self began the moment she helped BB-8. Throughout TFA it was clear she was repressing memories and more. She had flashbacks of her parents leaving and abilities that just came naturally to her- abilities much like Anakin’s. At the end of TFA there is that moment where she realises there is something different about her- her latent force ability had begun to manifest itself into something more tangible. Rey makes new friends with Finn, Han and Chewie and joins the resistance.She sees Han (and Luke in TLJ) as a mentor. The father figures she never had.

In TLJ we see Rey actively seeking help for her new abilities and we see her friendships growing. The training scene with Luke shows us she is being pulled to the dark side but doesn’t want to go. This mirrors Ren being pulled to the light. It’s also obvious by the end of TLJ that she has bonded with Leia and sees her as a mother figure.

Rey sees the good in people, especially Ben. Much like Luke sensing the good in his father. But she is torn- she hates Kylo and what he represents but wants to save Ben, which by the end of TRoS she has done with Leia’s help and her new force powers.

Talking of Force Powers, it was good to see that alongside Leia’s training programme, Rey was making use of the sacred Jedi texts she rescued from Ahch-to. I believe she found it easier to learn her abilities because, unlike Luke on Dagobah, she was willing to believe.

I think the revelation of Rey being a Palpatine wasn’t really a shock to her. That is one of the memories she blocked, probably because she couldn’t understand it at a young age and she was fighting against it.

By the end of the film Rey, who has finally opened herself up to communing with past Jedi, literally sacrifices herself to destroy her grandfather. Using the power of all the Jedi that now reside in her and using the lightsaber’s of both of her Skywalker Jedi Masters, she ends Palpatine and his bloodline. She refused to hate and refused to let her anger control her. She mastered it and any dark-side powers she has.

If she did absorb all the Sith as well, then she is, with the help of all the Jedi in her, controlling them too. Both sides in one person- balance.

At the end of the film Rey seems at peace, knowing she has both light and dark within her and controlled. She is at peace with herself, who and what she is. Rey realises that everything about her is down choice.

It is then she makes the most important choice- she chooses who she is.

She rejected her bloodline, the name Palpatine and everything that goes with it. The legacy of hate and death. The legacy that led to her biological parents being murdered by her own Grandfather.

Being hidden away on Jakku at a very young age, Rey has never known family so she chooses her own. The family that has helped her on her journey as a Jedi. The family that nurtured her and accepted her for who she is not what she is. She got approval from her new family at the end of the film.

She is Rey Skywalker.

I neglected to mention Rey’s new lightsaber. To fulfil her Jedi training she has crafted her own saber out of her staff and it has a yellow blade. A yellow blade is quite significant.

Lightsaber lore tells us that whilst there are a wide variety of blade colours, there are three main Jedi colours- Yellow, Blue and Green. These colours signified a specific role within the Jedi order (some of this comes from the Legends novels).

Blue signified the user is a Jedi Guardian- they focus on the more physical aspects of The Force.

Green signified a Jedi Consular who tended to spend time studying the mysteries of the force and battling the dark side.

Yellow was for Jedi Sentinels- These special Jedi combined both the combat and physical aspects of the Guardians alongside the studying of The Force. Jedi Sentinels were also known as peacekeepers and protectors. They also served as Jedi Temple guards.

This makes me believe that Rey will somehow resurrect the Jedi but return them to their former role, before they became arrogant and political.

Note: Like many others, I did chuckle when Rey buried Anakin’s/Luke’s lightsaber in the sand with Leia’s. It made me think of Anakin’s thoughts on sand and how his Jedi ghost would react! 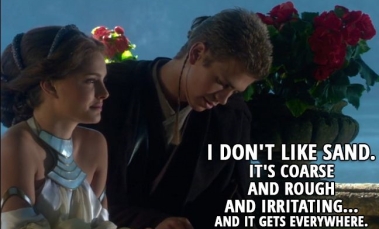 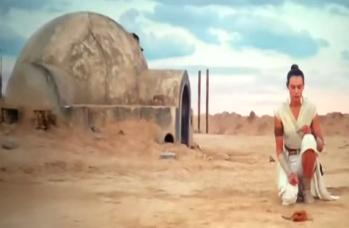