Sorry it’s taken so long to post about this. Haven’t been too well. At least I had something to read!

The first original novel based on the new Star Trek: Picard series is called ‘The Last Best Hope’ and is written by the amazing Una McCormack who also wrote one of my favourite Star Trek: Discovery books ‘The Way to the Stars’ which is all about a young Sylvia Tilly. 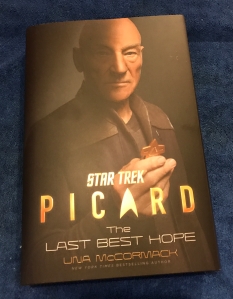 The Last Best Hope serves as a prequel to the new series and details lots of the backstory around the Romulan supernova and the rescue attempt by now Admiral Jean-Luc Picard.

Una does a great job on updating Picard’s character whilst also giving us more on the new characters of Raffi Musiker, Laris and Zhaban. The books also manages to fill in lots of blanks surrounding the supernova as well as answering the most important question on everyone’s mind……who takes over from JL as the captain of the Enterprise! (No spoilers- you’ll have to buy it!)

With appearances by TNG favourites such as Geordi, Worf and Beverley this book is a must for any Trekkie or anyone just getting into Trek because of the new series.

TV and Film can only show so much and that’s why books like these are important- they fill in the gaps and expand the story in a way that what we see on screen cannot.

Once again Una has created a piece of art that slides perfectly into place with existing canon at the same time as expanding it, all the whilst respecting the source material.